According to the World Health Organization, depressive disorders will be the leading cause of the global burden of disease by 2030.

This was one of those statements which hit me with a great big sledgehammer in the chest.  I found it shocking. I felt the heaviness of infinite sadness settle inside me.

The very same day my big boy came home with a writing competition about changing the world.  I told him this fact I’d read, and I could see him visibly changed by hearing it, as I had been.  He decided to look into it.  A hefty ask for an 11-year old, but unfortunately that’s the tough old world our “tween’s” are living in these days.

Who might get depression? we asked ourselves. “Someone who doesn’t get 300 likes on their selfie,” he said. “A mother stuck at home with no kids to care for anymore and no life,” I said. “Someone who works too hard like Dad,” he said.  I asked, “What about your sister when she goes to high school?” and he nodded looking worried. “My brother could have been depressed when that person in his class was being mean all the time,” he said. “Nanny?” I asked. He nodded, not knowing a reason why his loving nanny might get depression, but knowing that depression picks on anyone the black beast chooses.

What does depression look like? we wondered. “It might look like a bully” he said, “who is covering up his sadness by being a bully.”  I asked, “What about kids who don’t eat, or eat too much?” and he nodded with an assuredness which frightened me. 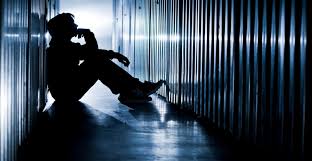 “Or people who drink too much alcohol or take drugs,” he added. “What about quiet people?” “What about old people?” “People who’ve come back from war?” “People who are too busy,” or “people who are not busy at all.”  And then, “What about suicide mum?” I nodded. Yes, depression can look like suicide. How sad, sad, sad that this plague currently thrives in the world of the young. “Or maybe it’s someone who seems bright and happy on the outside and you just can’t tell at all,” I tried.  And he agreed. “That’s pretty hard, that one,” we decided.

How can you fix depression? we now really wanted to know. He was touched by this  policeman’s story… Kevin Briggs worked as a highway patrol officer on the Golden Gate Bridge for most of his career. When it was built in 1937, this majestic San Francisco bridge was deemed by the chief engineer Joseph Strauss to be “practically suicide-proof – suicide from the bridge is neither practical nor probable”. From then, to now, there have been over 1600 suicide’s and the number is relentlessly growing.  The lucky one to two per cent of people who survived their jump, knew the second they let go that they had made a mistake and they wanted to live.  Kevin Briggs came in contact with hundreds of suicidal people on the Golden Gate Bridge.  Without any training in mental health or suicide when he began, Briggs felt all he could do was simply be there next to the people standing on the precipice, and listen to them talk. For as long as it took, he would stand there and listen – he mightn’t be trained, but any old person can listen, so he did.   Of all he came in contact with, Briggs saved all of those hundreds of people attempting suicide because he listened, except two.  Hundreds of people are still in this world, and eternally grateful to Kevin Briggs for listening that day.  It turns out they wanted to live after all.  That their depression actually could be healed. And it started with someone lending an ear.

Do you think we can something to avoid the 2030 depression epidemic?  How can we help or heal individuals?

2 thoughts on “No fear to lend an ear”