Once a month, I zip up my full-body suit of thick skin and head off to an open forum writers group.  Ooo, they are a tough bunch.

Having cut my writing teeth on the Sydney Morning Herald – way back when it was a place full of dinosaurs, of the Tyrannosaurus variety – I am used to harsh criticism on my words. I’ll never forget the first features piece I was asked to do:  I’d had no formal writing training, was in the midst of a fashion design degree (not known for its literary content) and had only done Q and A columns for the paper, where all I had to do was get the words which had come out of a celebrity’s mouth correct.

I was pleased with the emotion and humour I had put into the piece on Sydney’s street fashion. I’d poured over it, spent hours lying awake at night thinking about different angles, and placed my heart and soul onto the page for 1 million readers to enjoy.

The sub-editors promptly ripped out all of the above.  A skeleton was left and none of it was my personality, my spirit or my soul. As I tried to retrieve my heart from my feet, I realised swiftly that I needed to find that thick skin, or give up: These were my only two options.

As writing seems to be something that is inside me which has to come out, I kept going.

So now, once a month I toughen myself up and trot off to the open forum to read bits of creative writing.  As writing is such a solitary experience, I find these interactions imperative. With experience behind me, I now know that criticism is only someone else’s opinion when it comes to creative matters.  And often it will make my writing better, and sometimes it will just be that person’s words in the air.  In fact, these are probably good ideas to generally live life by. 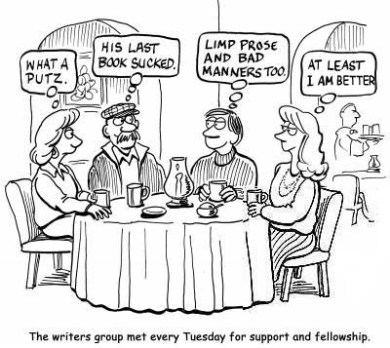 This past Monday night, I read out a piece set in a hotel in the 1920s, which looks into a squirmy subject – something which can make the face go red and people shift uncomfortably in their seats – the reader and the listeners.

Here is a snippet of what I read:

Lyssie is dying. Buried deep in the bathroom of the ninety mile corridor, in the dead of a hotel afternoon, where no one can hear her screams.  The screw inside her cranks up relentlessly, then explodes in her stomach… She passes out, alone.

“Suck!  See if you can suck it in, Lys,” Ruth is urging, shoving a homemade cigarette in her friend’s slackened mouth.

Lyssie, only half come-to, follows her instructions which brings on a coughing fit.  She doubles over in pain again. “What is it?” she croaks.

Lyssie, ever compliant, tries her best.  There is more coughing, and a little more writhing, but eventually the drug works its magic and her limbs begin to stretch out, long and loose, from their tightly curled position of the last four hours. She looks around, realising they have dragged her from the bathroom floor to one of the hotel rooms on the ninety mile. The door is shut and the airless room, hazy.

“Wow…. Hehe! I cahhn talk!” she doubles over again, but this time she’s giggling her head off.

“Are we dead?” asks Lyssie suddenly, sitting up from her prostrate position on the vulgar patterned carpet. “Did we die together?” ….

“Are we dead?  Really?  Are we dead?” Lyssie swiftly disconnects from her friend, this time her eyes wide and suddenly sober.

“What?  No! You…you pill!”  They erupt in laughter all over the floor together.

“You just got ya rags mate….” Tears of mirth roll around in innocent eyes.

“Mum not told ya has she… Same as mine.  Well, girls bleed out of their girl bits once a month. For forever. Means we can have babies now.”

“What’s wrong?” Ruth cuddles her friend tighter. “It’s alright, it’ll be over in a coupla days.” Lyssie begins to cry. “Clare said she’s as gonna get you some medicine to stop the pain because we can’t get stoned every time you get ‘em.  I told her stoned is fine Clare!  She didn’t like that much, hehe.”

Lyssie is really, out of control-sobbing now. “Hey – it’s ok, I get ‘em. Cranky Clare gets ‘em…well, that’s not a good example… Sonia at school gets ‘em – we all do, you’ll be ok!”  She rubs Lyssie’s back.

“It’s not that…” She gulps in a deep breath. “I just don’t wanna have a baby.  Mum’s always sayin’ it’s the worst thing that can ever happen to a woman, ruined her whole life, babies are good for nothin’ and she’da been so much better off if I hadn’t been born and wrecked everything”. She sniffs loudly. “She tried to get rid of me by drinkin’ that Lysol stuff they clean the bathroom’s with and even that didn’t stop it – you can’t stop it, Ruth!  That’s why she called me Lyssie – to remind her that Lysol doesn’t get rid of a baby and she should never let it happen again….” Another great sniff leads into more bawling.

Ruth looks at her distraught friend and curses the mother.

“I shoulda known she’d not told you about that stuff either.  Lys, you can’t get a baby just by havin’ ya periods.  You gotta have…” she shudders at the thought.

Ruth tremors again. “Disgustin’ is what it is.  The man puts his ding dong…” She can’t go on, physically nauseous at the thought, and just shows Lyssie where he puts it with her eyes instead.

Lyssie’s own eyes pop near out of her head. “That’s GROSE!” she shrieks. “Are you serious?”

“Well, I’m definitely safe then.”  And the giggle’s start all over again.

Finishing, I took a deep breath, and fortified myself to look up from my words, to the harsh faces of the judgemental panel.

I received praise from them all.  It leaves you with a smile and strengthened drive to keep going.  It was well worth zipping up that thick skin this week.

2 thoughts on “Getting my thick skin on”